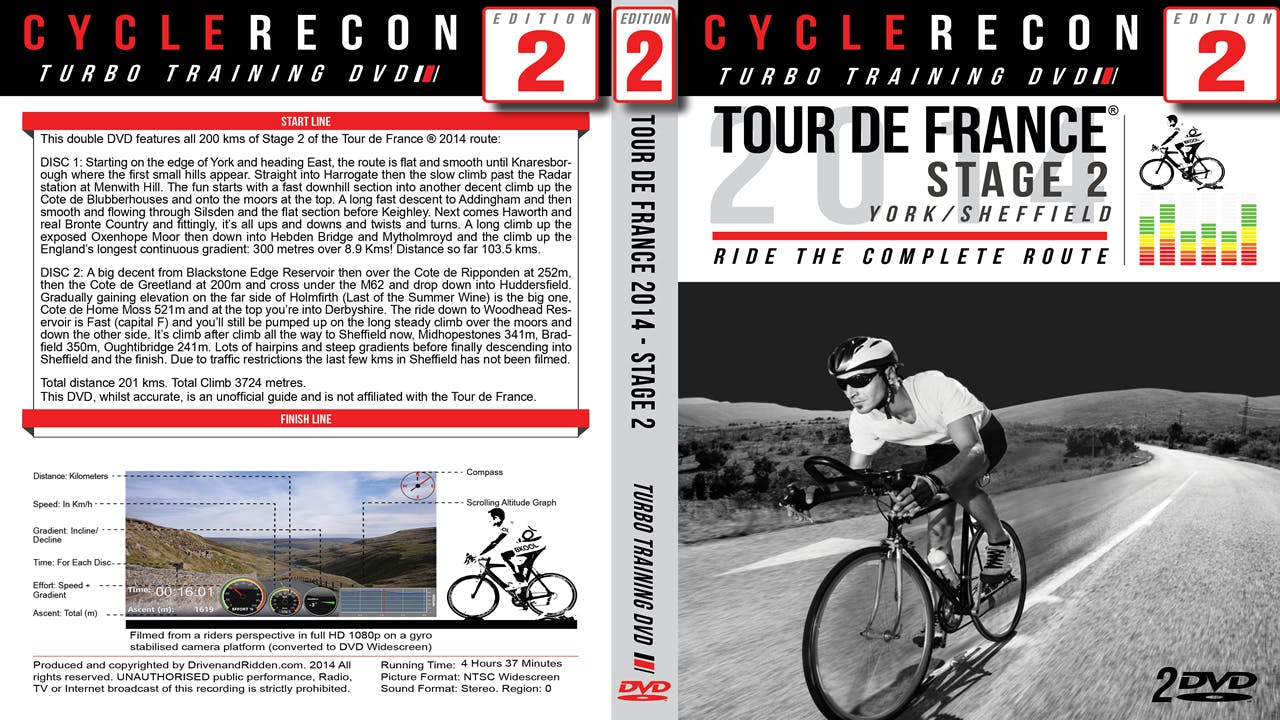 Filmed from a riders point of view on a gyro stabilised camera platform with a real-time digital dashboard, this download features all 200 kms of Stage 2 of the Tour de France ® 2014 route.

PART 1: Starting on the edge of York and heading East, the route is flat and smooth until Knaresborough
where the first small hills appear. Straight into Harrogate then the slow climb past the Radar
station at Menwith Hill. The fun starts with a fast downhill section into another decent climb up the
Cote de Blubberhouses and onto the moors at the top. A long fast descent to Addingham and then
smooth and flowing through Silsden and the flat section before Keighley. Next comes Haworth and
real Bronte Country and fittingly, it’s all ups and downs and twists and turns. A long climb up the
exposed Oxenhope Moor then down into Hebden Bridge and Mytholmroyd and the climb up the
England’s longest continuous gradient: 300 metres over 8.9 Kms! Distance so far 103.5 kms.

PART 2: A big decent from Blackstone Edge Reservoir then over the Cote de Ripponden at 252m,
then the Cote de Greetland at 200m and cross under the M62 and drop down into Huddersfield.
Gradually gaining elevation on the far side of Holmfirth (Last of the Summer Wine) is the big one,
Cote de Home Moss 521m and at the top you’re into Derbyshire. The ride down to Woodhead Reservoir
is Fast (capital F) and you’ll still be pumped up on the long steady climb over the moors and
down the other side. It’s climb after climb all the way to Sheffield now, Midhopestones 341m, Bradfield
350m, Oughtibridge 241m. Lots of hairpins and steep gradients before finally descending into
Sheffield and the finish. Due to traffic restrictions the last few kms in Sheffield has not been filmed.

This route film, whilst accurate, is an unofficial route guide and is not affiliated with the Tour de France.