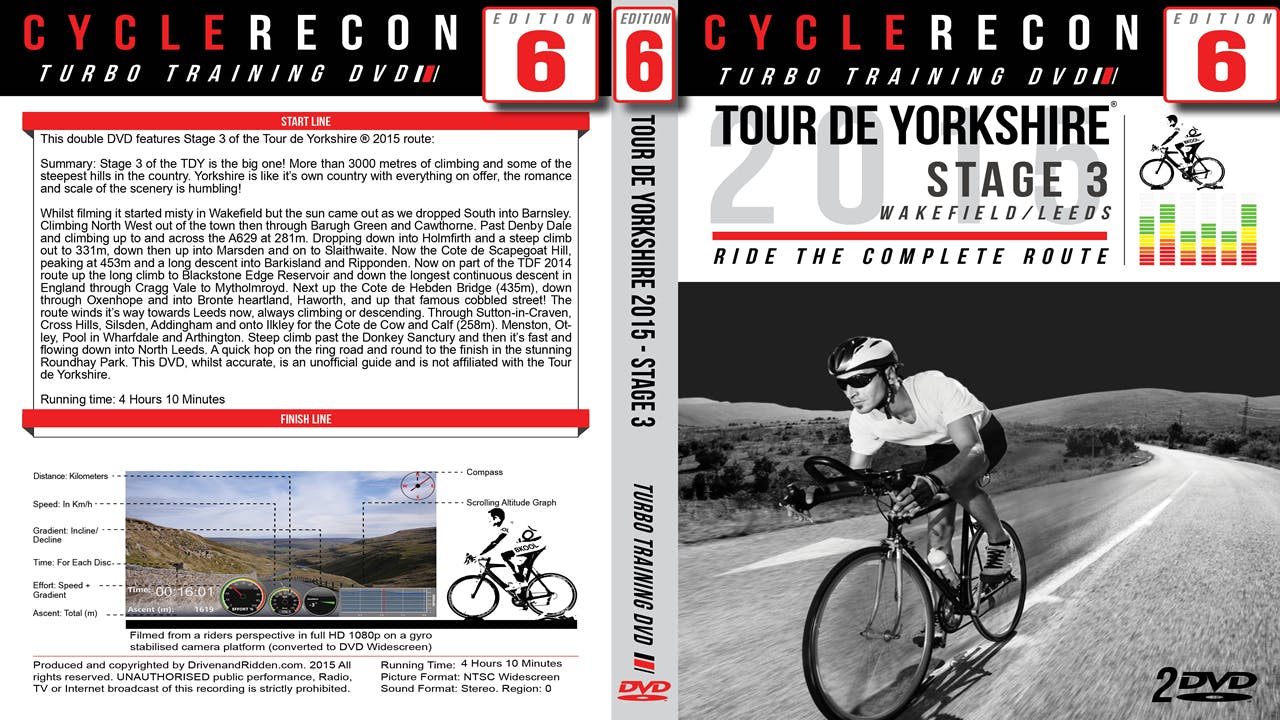 This film features Stage 3 of the Tour de Yorkshire ® 2015 route:

Summary: Stage 3 of the TDY is the big one! More than 3000 metres of climbing and some of the steepest hills in the country. Yorkshire is like it's own country with everything on offer, the romance and scale of the scenery is humbling!

Whilst filming it started misty in Wakefield but the sun came out as we dropped South into Barnsley. Climbing North West out of the town then through Barugh Green and Cawthorne. Past Denby Dale and climbing up to and across the A629 at 281m. Dropping down into Holmfirth and a steep climb out to 331m, down then up into Marsden and on to Slaithwaite. Now the Cote de Scapegoat Hill, peaking at 453m and a long descent into Barkisland and Ripponden. Now on part of the TDF 2014 route up the long climb to Blackstone Edge Reservoir and down the longest continuous descent in England through Cragg Vale to Mytholmroyd. Next up the Cote de Hebden Bridge (435m), down through Oxenhope and into Bronte heartland, Haworth, and up that famous cobbled street! Up the Cote de Goose Eye (342m) then the route winds it's way towards Leeds now, always climbing or descending. Through Sutton-in-Craven, Cross Hills, Silsden, Addingham and onto Ilkley for the Cote de Cow and Calf (258m). Menston, Pool in Wharfdale and Arthington. Steep climb past the Donkey Sanctury and then it's fast and flowing down into North Leeds. A quick hop on the ring road and round to the finish in the stunning Roundhay Park.

This film, whilst accurate, is an unofficial guide and is not affiliated with the Tour de Yorkshire. Due to roadworks and a diversion prior to the TDY 2015 the Otley / Cote de Chevin section is missing from the finished film.